Film Noir isn’t really all that Black and White

Posted on March 7, 2012 by whocaresreviews

After a drought and a best-of list to pretend I’m hard working, I come back with a colour based pun. Aren’t I grand?

Anyways, Wednesdays from now on are Article Wednesdays. No, there isn’t any form of witty pun or even a crappy one. I just couldn’t find a more suitable day to have articles on. Expect a lengthy wall of text full of pretentious bull each Wednesday from now on!

Films have been around for over a hundred years now, and that obviously means we are going to have our fair share of stale movies being released. Let’s face it; It’s hard to find an original film of many genres. How many times can you see silly couples doing dumb things in romantic comedies? How many more poop jokes can you take in any comedy, never mind? What about horror films, and how predictable they may be? Don’t you know exactly how many seconds it takes for a person to be killed as soon as they enter their car in a horror film (if not, it’s approximately five and a half seconds)? I’m not saying there aren’t any original films anymore, but I definitely feel that it is harder to make original films. Also, have you noticed how most genres and styles come and go in trends? Westerns ruled the classic days of cinema but not as much anymore, and there seems to be a sudden resurrection of zombie films and media recently (see what I did? I’m throwing in extra puns since I feel badly about the lack of updates).

However, one style I feel will never die is the good old Film Noir style. You know, the stories about detectives who think they have a damsel in distress when really she’s far more powerful than he is, and everything is dim and it’s heavy in terms of mood a-okay I know you have the general idea. Film Noir may never die; Not while films are still being made.

For such a dark genre, he sure looks like one happy little shit doesn't he?

Film Noir, to be perfectly honest, isn’t even an exact genre. In fact, many critics wouldn’t call it a genre at all but instead a style. A group of films that shared a similar dark, shadowy cinematography and story lines of fallen detectives with overbearing women was finally given some sort of a label in 1946 when French writer Nino Frank allegedly came up with the word in one of his publications. Before then, these films were just considered mysteries, I suppose. Yet, there were so many of them. The first reported Film Noir-style of film is The Maltese Falcon, which was released in 1941, years before Film Noir was even a thing. So, people weren’t conscious of the eventual style of filmmaking they were contributing to? That’s reason one right there as to why Film Noir will never die. Why? Well, because it’s a genre that evolved by its own natural course and not by force. You can say that about any genre, but none evolved quite the way Film Noir did. As well, if Film Noir films were being made before the term or even the concept existed, surely that means that this kind of filmmaking appealed to directors and producers, right?

Before we carry on with the evolution of said style, let’s look at reason two. This style has many components that can easily be played around with. Romance films are almost stuck with how they have to be, and so are action films. Even horror films, in a sense, are stuck in a connect-the-dots state of mind. What do you need in a film for it to be Film Noir? Essentially, a sense of mystery, a female character that changes the game, a protagonist that struggles against both, and a brooding atmosphere. Those are some of they components. Seems very ambiguous, doesn’t it? Actually it is. Enter Neo Noir: Basically the “New Wave” of Film Noir.

Neo Noir is any form of modern film that plays with the concepts of Film Noir. Believe me, there are a large amount of these (possibly more than you initially realize). For instance, Blue Velvet, a mystery thriller released in the 80’s, has all of the above components but they are changed to fit the story. Instead of a fallen detective, we have an overly curious high school kid that wants excitement in his life, so he makes himself a part of a terrifying case, which involves component two: The dangerous woman. In this case, it’s a nymphomaniac lounge singer whose forced to perform favors for a dangerous criminal. The mystery is still there and all of the components are just played around with. Director David Lynch has actually made many films of a Neo Noir nature, including even a television series (if you haven’t watched Twin Peaks, stop reading my blog and do it now. Yes, all thirty or so episodes. Right now.). Another great example is his film Mulholland Drive, where the fallen detective is actually the femme fatale as well. In fact, there are two women that work both as detectives and their own femme fatales. So that’s all well and good, but these are still essentially films that are still part of the mystery genre. That still puts some limitations on what Film Noir can be, right? 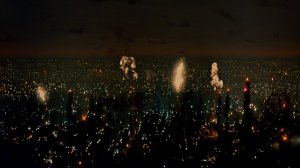 Neo Noir has become a large game changer in what Science Fiction can be. An early example is Ridley Scott’s Blade Runner, where the detective has to hunt androids in a world where they are so advanced that anybody can be an android and only specialists would be able to tell. His femme fatale is, you guessed it, an android: An untouchable. A more recent example everyone will be able to relate to is Christopher Nolan’s gargantuan Inception. Again, DiCaprio is the fallen detective, and his wife is the femme fatale. See how reoccurring these themes are? Have you also noticed how I haven’t had to bring up the idea of mystery or isolation either, since they seem so painfully obvious once the film name is mentioned? Well, the main reason why I left those out is because I want to focus more on the struggling male protagonist and the unstoppable female character. In the early days of cinema, the John Wayne-like protagonist would be a macho male that could probably eat bullets through his eyes and shit out a motorcycle, while the woman would be defenseless and would need the chopper-shitting hero to save her. Film Noir helped change that, and while it wasn’t as obvious as it was back then, now, with the concept of changing gender stereotypes in films is still on the rise, it’s as important as ever.

If you recognize this photo, you know very well where I'm going with this

In films like Double Indemnity and Out of the Past, the female characters obviously had dominance on the male leads but they could still be overcome, even if the male leads suffered during the process or afterwards. In Film Noirs from as recent as even the 70’s, female characters ended up having no control of how powerful they were. Look at Chinatown, where the female character is only unstoppable because she had no choice. I won’t say much more for those of you who haven’t seen the film, but those of you who have know exactly what I am talking about. A recent example that is creating a storm is the pairing of both the Swedish and American renditions of The Girl with the Dragon Tattoo, where Lisbeth Salander has become a household name no matter who has played her. This introverted genius hacker who stands her own ground and takes answers from nobody but herself has become a modern day heroine. The problem is, she doesn’t exactly want to be. She shies away from praise and acceptance and lets very few even acknowledge her, let alone get to know her. It’s as if she’s forced to be a femme fatale, and when she doesn’t agree to fit with this stereotype, the story throws blood curdling obstacles her way to force her to react and thus take control of the story and herself. She is a brilliant example of the extent a Neo Noir can take the original concepts.

But what about the male leads? Do they suffer? Since now that girls can identify with ass kicking heroines and/or females that are extremely significant to the story, do guys take a step backwards? Actually, not really. Now men can identify with a more realistic, relatable character as opposed to one we wish we could be. Let’s go back to John Wayne (I don’t have anything against him, I swear. He’s a cool guy and a pretty good actor, but he truly is the best example of an actor that played unrealistically invincible heroes). Even Western films began to go for a more realistic approach, and these even included overly stylized Western films. John Wayne was nice and all, but men could not put themselves in his shoes. In a large, open Western landscape where the environment could eat the hero alive, why should we care about an untouchable? You’d find that Westerns with far more skeptical heroes were more common than your typical John Wayne’s, especially during the 60’s. In fact, in Once Upon a Time in the West, Sergio Leone took an American icon (Henry Fonda) and turned him into a villain within seconds of his screen time. Similar concept with Film Noir and Neo Noir, right? We can identify more with the struggling detectives that get swallowed whole by the dooming city around him and the cluttered desk full of paper work and files he will never get through. We can identify with the man that falls for the wrong women that ultimately may lead him to his doom (if they don’t, they still take him on a journey that forces him to test and.or change himself). We can identify with failure and with stress. In Film Noir, where any ending is possible, we can identify with any possible outcome and not just a happy one because Hollywood says it should be happy (I wish my life were run that way).

Do you guys believe Film Noir will ever end? Should it?