Posted on January 25, 2013 by whocaresreviews 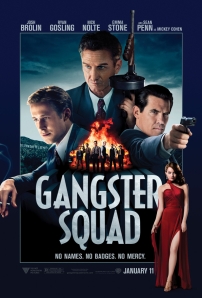 Rating: 2.8/10
Flashy? Definitely. Sexy? Unquestionably. Captivating? Not in the slightest. Gangster Squad is a visually thrilling film where you just want to see the next explosion Mickey Cohen (Sean Penn) has or the next big shoot out. You strive to see the actors doing their jobs with finesse but even they cannot hide you from the problems this movie has. It’s been painted layer after layer after layer to try and hide the basic foundations that are supposed to be the structure of this movie. In the end, the structure that is there may as well have been made out of toothpicks. It’s so embarrassingly thin, and it’s a damn shame because the cast is absolutely terrific, the special effects are rather nice, the styles the movie has going for it are stunning and there is a nice constant pace to keep the movie going along. 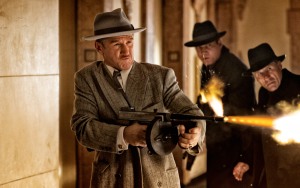 He didn’t take his divorce from Robin Wright too well…

How can a movie with so much good in it be rated so low? How could such a promising film with such class and such pizazz be considered such a miss? There are two fundamental reasons as to why this movie misses the mark. The first reason is that the story just isn’t good enough. It’s so incredibly cliched and expected. Everything visually is above and beyond the story, and truth be told, it’s extremely noticeable. It’s almost as if the minds behind this movie came up with a great cast that would look and act like gangsters well and they knew it’d be thrilling, so they instantly tied it to a true story about a criminal and tossed the script out into the open to let the actors flock towards it and suddenly they had a movie. It seems like all of the thought went into the production and not the pre-production. The ending result could have been brilliant if they worked more on getting there. The trailer was so promising, and that’s exactly the problem. The trailer isn’t a full movie (obviously), and it can be reworked to take out all flaws of such a movie (again, obviously). With a movie like Gangster Squad whose only problem is the story, it’s almost virtually impossible to spot out a bad film from a trailer. Congratulations, you guys. You sold us a movie that may as well have been a cut out of a Lamborghini placed in front of a bicycle. 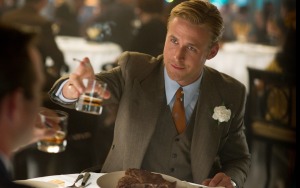 “If you don’t have a shot in the next five to ten minutes, you’re on your own.”

But before we get into the biggest problem of the movie, let’s look at the good aspects of this movie. We have a well acted villain who is seemingly unstoppable because of his stature in society, despite the crimes he’s committed. We have an honest hero who only wants to do what is right (both lawfully and morally) who starts a team to bring down said criminal. That’s nice and all, and really remarkable. It’s nice to have a refreshing story like this.

Oh wait it isn’t refreshing. Well, perhaps in the larger picture it isn’t, but in this context, where the underdogs end up becoming the forces to reckon with themselves and suddenly the villain has to take action, it is a nice touch and it’s not something I’ve personally seen before.

Oh wait, yes I have. 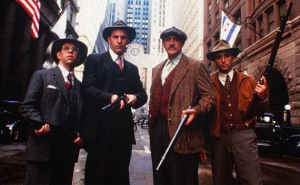 Good lord when did Anthony Mackie turn into a white middle aged… whatever nationality Malone is?

The only time the story in Gangster Squad is remotely captivating is when it’s, let’s face it, pretty much stealing from Brian De Palma’s The Untouchables. You replace De Niro and Capone with Penn and Cohen. You replace Costner with Brolin. You replace The Untouchables (a title given to this group of underdogs by the media) with the Gangster Squad (a title given to this group of underdogs by the media). There are many more similarities (right down to a specific scene that is way too closely specific to be coincidental) but there’s no point. Once something is established as a rip off, it’s blatantly a rip off. You can go into the many other ways it’s stealing from something else or the many ways it is different in its own right. Once there are too many similarities for comfort, then the credibility is already lost and basically unsalvageable.

Now what you may be thinking is that both are based on true stories about their respective criminals (Al Capone and Mickey Cohen), which you’d be correct in thinking. If the stories are similar, technically it’s hard to avoid any similarities in the final product. Perhaps, apart from the fact that De Palma infamously included events that didn’t happen in real life (that were criticized by anyone relating to the real events) and, what a coincidence, Gangster Squad had them too (that specific scene I mentioned earlier being an example). Also, if the crew behind Gangster Squad were quick enough to get rid of a scene and reshoot it just to be as “violent” as the original (not my words, by the way), I think it’s safe to say that Gangster Squad isn’t entirely accurate either to begin with. I know this was to avoid the comparisons to the tragic shootings at the cinema during the premiere of The Dark Knight Rises, and I have to honour that, but it’s just an example I have to make explicit because of the flaws the movie has and how they are in fact inexcusable. I am not shaming them for working around a scene during a fragile time in the United States. I am shaming them for the blatant theft of another movie. 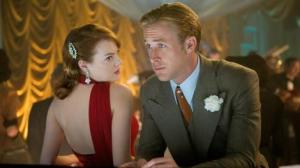 The new scene was, like, it was photoshopped or something.

Whether you’ve seen The Untouchables or not, the movie is still flat by itself. It may even be kind of enjoyable if you are none the wiser of The Untouchables, which should be seen itself; It’s heartfelt, full of cheesy awkward lines that only add to the humanistic characters that somehow made a difference in the world, and it’s full of love for the original story and filmmaking. However, if you do find the “strong” parts that Gangster Squad steals from The Untouchables enjoyable, that’s your privilege and I wish I was in your shoes. I wish I liked this movie, but when it wasn’t stale, it was copied. The originality in this story barely speaks about anything, and when the movie has something to say, it includes footnotes from another, better, movie that already had its say in the film world and did a fine job with it. In the end, all style and no say makes Gangster Squad a dull film.